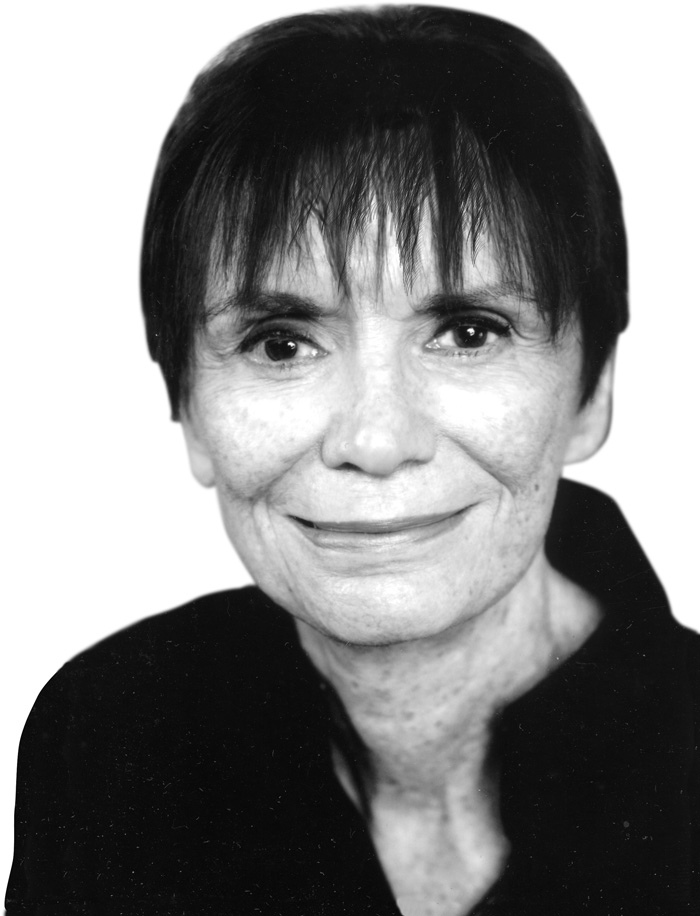 I am an identical twin with a preference for being one of a kind. In my early twenties, a time when it seemed like everyone wanted to move to my hometown, Los Angeles, I accepted a job in snowy Buffalo, New York. My mother’s farewell words were, “When you get to Buffalo, dear, will you please start acting like everyone else.”

In spite of my mother’s concerns, people in Buffalo liked me and I decided to make it my home, which it was for several years. During that time I quit the job in a research lab that had taken me there and, for half my previous salary, went to work in an art gallery. Every day, surrounded by art, was living a fantasy. Artists fascinated me, but it never occurred to me that I would ever be one. From Buffalo I moved to Connecticut where I ordered a yellow car, the odd looking little Deux Chevaux, which I had fallen in love with on a trip to France. It turned out that yellow was not available and, without warning, a drab gray car showed up. 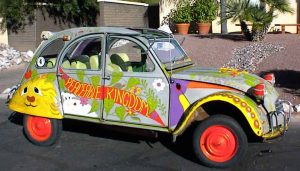 Very soon after a sign on a store front reading AUTOMOTIVE ENAMELS caught my eye. I carried home a dozen cans of paint and immediately started my very first painting, a peaceable kingdom of brightly colored animals and plants all over the body of my new gray car. It changed my life. Children begged to take rides in it and it appeared in newspaper photographs. Reading myself referred to as an artist was hard to believe. And I loved it.

I began building big papier mache sculptures of camels, armadillos, lions, and lambs, versions of the animals I painted on my car. Leftover car paint was used to decorate them. Soon they were carried in an art gallery and a Stamford, Connecticut museum invited me to teach the craft to children. An artist, a good friend, urged me to start painting on canvas. I followed her advice and, improbably, was invited to enter my paintings in big competitive art shows. They won awards and my work appeared in magazines and books.

In 1975, five years after trying my first painting on canvas, I sat on a stage In New York, surrounded by people like Paul Cadmus, Willem de Kooning, Tennessee Williams and Kurt Vonnegut, the membership of the American Academy of Arts and Letters. I was there as a recipient of an award for Work of Distinction. Soon my paintings were carried by a New York gallery and shown in museums in the United States, Europe and Japan.

It was a heyday for work by self taught artists. In the United States the tradition began in the colonies, before the American Revolution. Actually, it was born before history on the walls of caves and will probably go on as long as people need to express ideas created in their own imaginations, but without training as artists. The style of their work will continue to be determined by their intuition and their innate skill or lack of it.

Along with the interest in the work of self taught artists came “experts” to inform the public in articles and books. Some believed, as some still do, that middle class Americans are too sophisticated to be truly untrained and merely appropriate the style from past work they have seen. Being untrained, I hadn’t the foggiest notion how to depict my ideas in someone else’s style. Had I that facility, I would have preferred to paint like Matisse instead of doing what I was able to do.

My subjects stir my feelings. That includes animals. On the darker side, tornadoes, tsunamis, earthquakes and blizzards. A visit to Los Angeles brought back memories of what a fanciful place it had been during my childhood, when there were hermits in the Hollywood Hills, cafes like giant fox terriers and a beloved blimp that children waved to as it floated over the city every day. How it had changed! A large painting, “Temporary Contemporary”, depicts its transformation from kitsch to culture.

In 1990 a New York publisher asked me to illustrate a children’s book. That fulfilled a wish I made when I was 12 years old and wrote and illustrated a book for my grandmother. It was the story of a rabbit who goes to Hollywood to be in the movies. Having a book published is quite a thrill and doing the paintings for my own children’s stories takes me back to my own childhood. The feeling I have while working is the best reward of all.