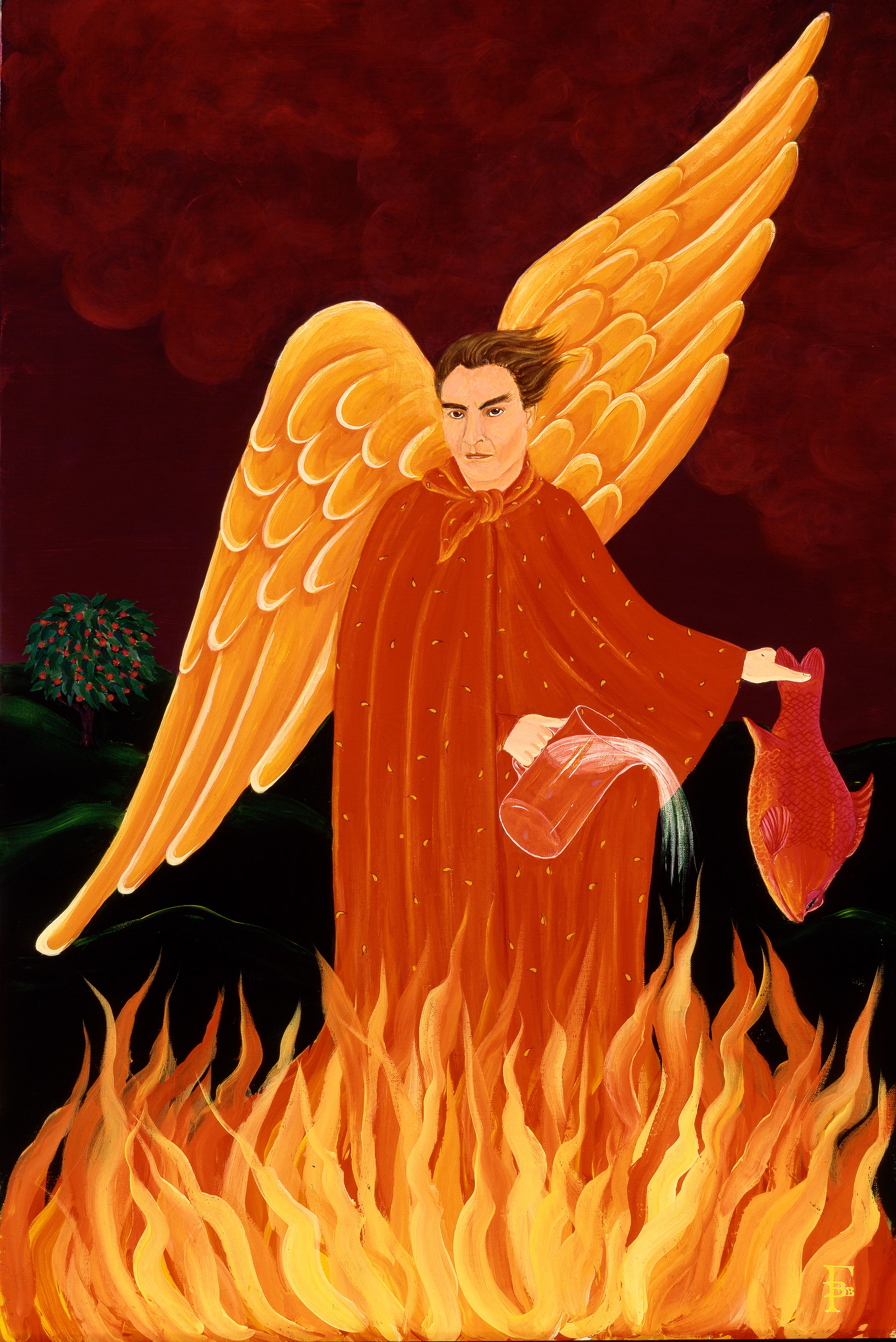 In the 20th century, when multitudes paid homage to art (and still do), archangels were critics whose messages served to warn, interpret and guide the true believers of the art world.

Raphael (Hilton Kramer) healed blindness with the ashes of a dead fish and troubled the waters.

The Editor’s Note from the December 1987 of MD Magazine describes this painting well: 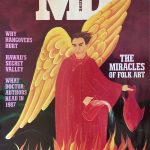 What’s that – the Miracle of the Fish? An inadequate firefighter with wings? An angel preparing dinner?

Such were the the questions I was asked when I showed the paining on this month’s cover to certain members of the editorial staff. My associates had no argument with my conviction that it’s a powerful image, but what , after all, does it represent? I explained: It’s Hilton Kramer, former New York Times art critic and editor of the the New Criterion. And he’s depicted as archangel Raphael.

Then I called the painter, Barbara Falk, to help me out. “A very strange thing has been happening in the art world,” she said from her Tucson studio. “Art buyers are listening to dealers, not critics. There is a tremendous amount of money being poured into art that simply doesn’t merit the attention it’s receiving. The critics are sending out that message, but it’s just not getting through. Like gods, they sit isolated on high. What they need are angels to pass their message along.”

And thus was born our cover image, the first of a series of four critics-as-angels paintings.

So why the water, the flames, and the fish?  “Raphael is frequently depicted with water,” Falk explained. “Here, I interpret that as him dousing the flames, perhaps of some evil force.” The flames, in conjunction with the fish, also refer to Raphael, who cured blindness with the ashes of a dead fish. (And don’t think for a minute that any parallel you might draw between a dead fish and today’s avant-garde is purely accidental.)

Falks’s concern with the “sacred image” places her squarely in the ranks of the votive painters Oscar De Mejo describes in our cover story this month. (See “The Miracles of Folk Art,” starting page 36.) De Mejo, a prominent naive painter himself, explained to me that, self-taught, Falk is a perfect example of how naive art flourishes today, even if it isn’t always the cover of a magazine. As contemporary as her concerns are, her miracle painting has its roots in centuries of tradition.

I asked Falk one final question: What does Hilton Kramer think of the painting? She laughed. “I haven’t shown it to him,” she admitted, “and I’m curious about what he’d think of it. I guess I’d be a little concerned about his reaction, but he does have a good sense of humor.”Sharon AvRutic, Editor, MD Magazine